So... I went to visit LA to take my niece and nephews out to Disneyland (where I purchased something AWESOME!!!) and visit some friends. While I was there, I found some boxes in my friends garage with some of my old stuff from CalArts inside. And in one of those boxes I found this: 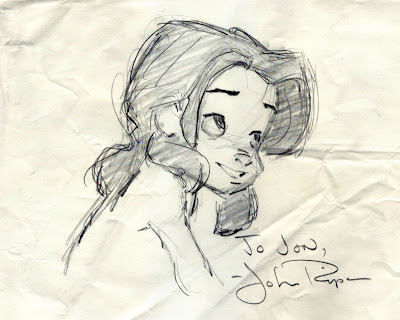 A sketch that John Ripa did for me while he visited my animation class! This drawing was squished between my Illusion of Life book and my Richard Williams book. Its in a banged up state... but man, I totally thought I lost this thing! What a find! (FYI: John Ripa was the supervising animator on young and baby tarzan. He also studied under Glene Keane... And is also one of the most inspirational speakers I've ever met.)

He did this drawing in a couple of minutes -but this very drawing has inspired me for the next couple of years that I was at school. Its pretty incredible when you're a student and someone that you look up to offers you a hand. Thanks John. I hope that one day I'm worthy enough to pay it forward.

Okay! Now some of my drawings!
(wow, maybe I should STARTED with mine...) 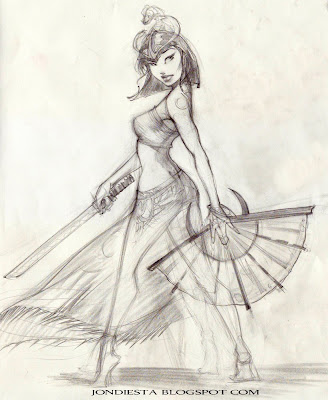 So this first one was drawn at draw night. Haha, and Alan Tew has an awesome post on what exactly happened that night. I didn't clean this image up at all, so that I can show you guys the parts that I was having trouble with. And it's the legs. And at draw nights, I'm trying to take advantage of drawing with other great artists and asking them to do a "draw over". So this time Alan took a sheet of paper and sketched over it. 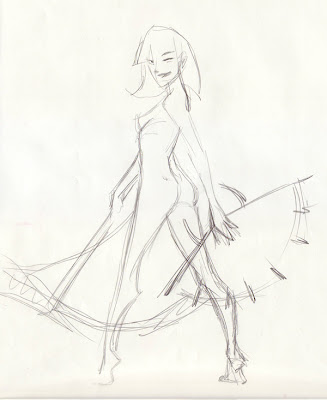 And man... I learned a lot. There's so much that I learned from watching him sketch it out, rather than looking at the finished sketch. Thanks man. And the following day, my officemate Dave McClellan offered to do a sketch over: 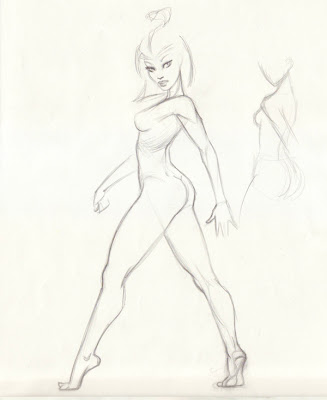 Here I learned that the shoulder looked a bit off with my sketch. And so Dave suggested some alternate solutions. Mark Behm also pointed out that the shoulder looked questionable on my last post. So I'll be paying extra attention on the shoulders of the drawings to come. Thanks for the crit Mark! Its so great seeing other people's takes on the same sketch. Thanks Dave. I hope to revise my drawing with the paint up.

And now, back to my "Chic's and Monsters" theme! 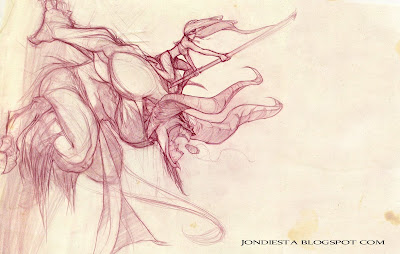 I actually did this sketch a few draw nights ago. And this time I asked Ryan Ottley to do a sketch over. Unfortunately, I don't have that drawing at my desk to scan in, so I'm going to have to edit that in later. But he's a total Badass. I learned A TON from the way he approaches sketching. Thanks Ryan.

And last but not least... the thing that a purchased from Disneyland: 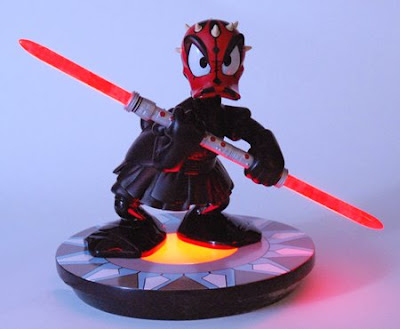 I like reading this stuff dude, you really should stop being so shy and whatnot and post more MOREEEEEEEEE.

The silhouettes and flow of your figures are great--hoping the chicks and monsters theme keeps going!

Oh, and thank you so much for posting that Donald Duck figurine, it really made me day!

very kik ass of you to share the goodies.

oh and how much you sellin that darth duck?

I absolutely love your monster sketches! your stuff really is great I would love to see more!

Thanks for stopping by guys! I've been really busy lately, but I'll be sure a post the few sketches that I have.

this drawing is nothing short of stunning.

Hot DAMN, dude! Not just a drawing from John Ripa, but Darth Duck?

Man, I can't help it, that Tarzan sketch is pure awesome.

Hello
I just discovered your blog and I freaked. I love your drawings and the skill you have in the stroke. I have studied arts career and am familiar with the world of drawing, and I love to find. Of course, I follow you.

Jon Diesta
Hmmm.. let's see, I was born in San Diego and then graduated from CalArts '05. I've been working for Disney Interactive Studios | Avalanche since Jan 2006. I am a concept artist with an emphasis on Character Design. Hmm, what else... I believe peanut butter is evil, and that Reese's peanut butter cups are a waste of good chocolate. Feel free to email me or drop me a comment -even if its to tell me that you hate peanut butter too!